Having been given a jelly roll and a quilting book for Christmas 2010, there is no excuse not to get on with quiltmaking.

Here's what happened next...

Binding & and a label - a finish

This orange binding hits the mark, after my squiggly FMQ border design.

Which just leaves a label to embroider and attach.  Not quite square, but near enough.

So we have the finished article here, which I dropped round to Rosie's house.  Baby JJ was unfazed by being held for an hour by a cack-handed stranger, and Rosie later sent me a pic of him lying on the quilt.

She was more taken by the animals on the back, than the 'pretty' side, but that just goes to show that the backing choice was a good one!
And now the machine is tucked away until the next project - thank you to everyone for suggestions, input and support.
Posted by Hazel at 2:05 pm 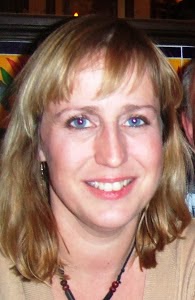 Hazel
Any thoughts or suggestions? I'd love to hear from you! hazel_at_the_hill AT hotmail DOT co DOT uk